September 15 - Crusin On The Train 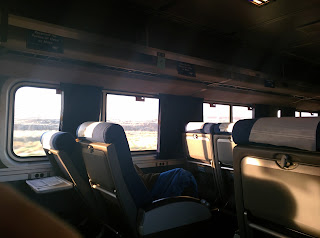 I don't really remember my last post, I think it was the night before I hit the border. I wanted to use a computer to write my last blog but I don't think I'll have one for another couple days. I'm riding the Amtrak from East Glacier to Seattle. A day early but the train was running 4 hours late because it hit a car parked on the tracks, who does that. Right now I'm looking out the window at the western Cascades and already wishing I was out there hiking. I think the the Pacific Northwest Trail is calling my name. 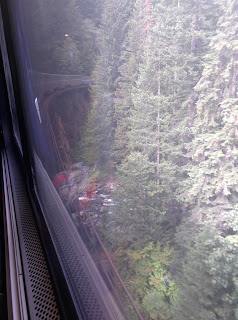 When you set out to do something epic you become immersed in the journey and adventure. As it progresses you realize that you just want it to end so everything can return to "normal". Over the last couple of weeks my fellow thru hikers and I would daydream and share our thoughts about beds and the comforts of civilized life with each other. It's funny that all we could think of was returning to our busy lives and cities as we walked though some of the most beautiful wilderness our country has to offer. It was bittersweet to say the least, it's beyond me how some hikers can stay out here for 6 or 7 months.

Back to my final day on the Continental Divide Trail.

I woke up a little late to cold and cloudy skies, overnight a front moved in and all of the mountains were covered it clouds. During the night I woke up a few times to see the endless stars silhouetted by the mountains on the other side of Waterton Lake.  It was like an upside down sea of clouds with mountains and a beautiful lake peaking out of the bottom. Still sore as hell I limped the 4 miles to the border, it was painful but my spirits were high. I'm not sure what I was feeling but I knew I would make it to that monument. Around 9:05 I spotted the border clear cut line and shortly after my dad standing there with his iPhone out filming, vertically for anyone that cares about things like that. I strolled up and gave him a high five and a hug. Awkwardly he kept filming as I embraced the moment. It was amazing and surreal, kind of like climbing to the top of a tough mountain, I don't think I realized where I was. A nice lady came down and offered us fresh trout and took some photos for us. I made a fool out of myself and took a bunch of well thought out photos. There was even Champagne, cheese and crackers! You know they speak French in Alberta Canada. After the celebrations were complete we hiked to the town of Waterton, Alberta to meet up with Vine. The hike was full of merry talk and epic stories. The rest of the day was spent celebrating and storytelling. 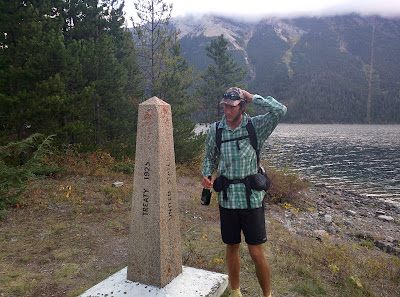