Let me start off by wishing my friends the best if luck this weekend at King of the Lake in Tahoe. This won't get posted until after they finish but I hope they get some good vibes while I type this.

It seems everyday is started by lugging our heavy packs and snowshoes up to the highest point we can find. Everything is great until we reach some impassable area that threatens our very existence.

Today it was at a place called the "knife edge" on our maps.  After gaining the knife edge we were quickly greeted with a snow covered slope and no safe way down the mountain.  We made it out about 50 feet while clinging to the rock face for support.  Atlas came back down the trail saying "I'm not doing that".  Reststop walked right by to make his attempt. I was in agreement with Atlas and turned back to where the cliff edge started. While looking for an alternative route I found a bunch of trail tools and a first aid kit in the rocks. Atlas slowly navigated some rock scree and Reststop falling off a rock kinda glisaded down. I found another trail and though it would be a good idea to follow it down. Bigfoot followed me and our good trail ended abruptly. We ended up following Atlas down and them picking up Reststop's snow prints. No one was dead at this point just a bit scraped up and out of adrenaline. We all took different routes back up and met at a saddle for a long lunch. 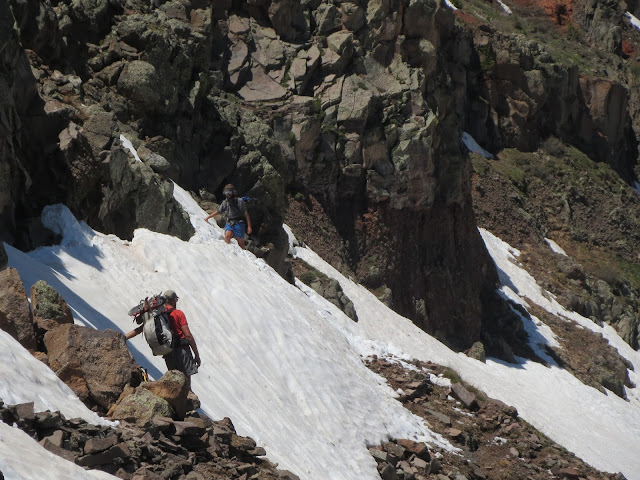 Without the snow cover it would have only taken us 10-20 to hike this part. There was also a high route we all missed. It ended up taking a couple hours to go a couple hundred yards. The result was a low mileage day, 15.

Tomorrow will be day 4 and the snow doesn't look any better. San Juan's!!! Wooohoooo!
Posted by OD at 3:51 PM